From Sadler to Headsetsdotcom to SurfrApp, it was high-time to pick a forever last name.

After what seems like years of searching and confusion, I’ve finally found a name that carries meaning: Zook.

Interestingly enough (to me at least), the journey to get to this new last name is not unlike that of any other entrepreneurial venture: Ups and downs, lots of changes, expenses and an eventual tipping point.

TL;DR – My new AND FINAL last name is Zook (rhymes with “look”)

For the rest of you, let’s dive a little deeper and talk about how I arrived at becoming Jason Zook.

I am no longer Jason Sadler and from here on out am Jason Zook!

I want it to be crystal clear, I am no longer Jason Sadler. In fact, since December of 2012 I haven’t been Jason Sadler.

I completely understand that most normal people don’t change their names ever (or maybe once for most women). So it might be difficult for people to sympathize with why I don’t want to be known as Jason Sadler anymore.

Are you going to offend me if you call me Jason Sadler? Yeah, you are, you jerk! Okay, maybe not. But I would ask that if you do know me you could respect the fact that I’d prefer to use my new (and final) name.

A Name Needs Meaning (And I Have That With “Zook”)

When challenged with the decision to pick a last name I actually wanted to keep forever, I knew I wanted to pick something that I would be extremely proud of.

Listen, I’m not saying I’m not proud of Headsetsdotcom or SurfrApp (read more on those here) – I’m actually more proud of those last names that the ones I carried through my childhood (Stein, Hantzsche and Sadler). Growing up, I didn’t have a stable father figure. Unfortunately, though, I did have to endure their last names. And when one would leave my life through circumstances outside of my amazing mother’s control, I was left with HIS name. A name that carried memories (most often ones I didn’t have interest in carrying.)

Who was Roy Zook?

If you talked to my childhood self, I would have told you he was the older guy who sat in his recliner in a home in the retirement community of Sun City, Arizona. He was a tall, slender man who wore glasses and enjoyed crossword puzzles and Triscuit crackers. He had an interesting cough (which our family called “The Zook Throat”). It’s amazing the things you remember as a kid. 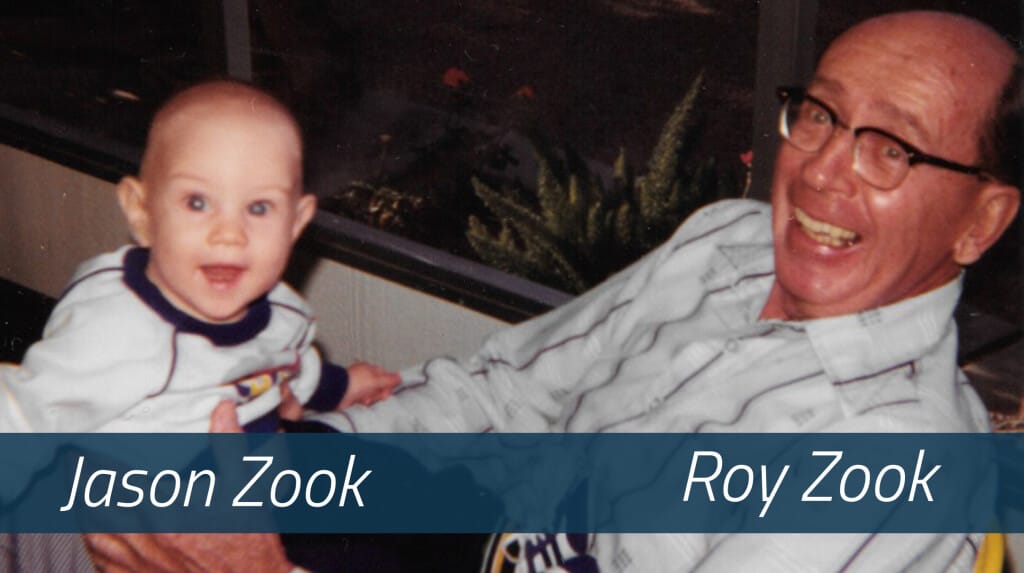 But Roy Zook was, obviously, much more than a Great Grandfather who ate Triscuits and coughed.

He was actually quite a brilliant man. How brilliant? Well apparently he was honored with the Nikola Tesla Award in 1973 (presented to individuals who have made significant contributions to the electric utility industry). He was Manager of Cooperative Power Association in Minneapolis, MN, at the time. Yeah, not too shabby huh?

On a visit with my grandparents, I asked them some questions about my Great Grandfather. I’d let them know I wanted to carry on his last name, but that I also wanted to learn more about him and his life.

Roy Zook, born in Camden, NJ, in 1912. He grew up during WWI and the Great Depression. He married my Great Grandmother, Junice Stromme, in 1942, and they were happily married for 58 years. He served in WWII as a Major, USA Signal Corps, in the CBI (China, Burma, India) Theater. When he returned from overseas, he returned to his job with the Department of Agriculture, Rural Electrification Administration, as an electrical engineer. He remained there until 1963 when he left to become Manager of Cooperative Power Association. He grew that organization from three people to over 100 when he retired in 1973.

Now I certainly don’t have aspirations to work in the power industry, but I have great admiration for what he was able to accomplish throughout his career. My grandmother (his daughter) tells me that he was a very driven man, a very smart man and a hard worker. I’d like to think some version of those traits were passed directly through the bloodlines.

When Roy Zook passed away in 2001, the Zook name ended with him. The more I learned about him and the more I thought of a last name I could be proud of, the more I wanted to become Jason Zook.

A name that almost was: Jason Moorman

I mentioned my grandparents earlier and you may be wondering why I didn’t take their name. Well, as much as I love and appreciate them, they’re fortunate to have another side of the family (my grandfather’s) that will carry the Moorman name forward. Honestly, it’s that simple.

I know my grandparents will read this and I hope they know how much I love them and how grateful I am for their overwhelming support. They get all the credit for the facts about my Great Grandfather! (I only brought the thing about crosswords and Triscuits to the table…)

No More Name Changes, I Will Be Jason Zook Forever

I have absolutely zero regrets when it comes to selling my last name twice. It afforded me the luxury of continuing to build my business(es) while also introducing me to new people and new things. Being able to help a couple non-profit organizations along the way wasn’t too bad either.

Some of you might be wondering, “Jason, why didn’t you just take the name ‘Zook’ a couple years ago?”

And to you folks, I posit the answer that it wasn’t even on my radar. I was in a different mental state in 2012 than I’m in now. I definitely have a greater appreciation for my past and wouldn’t have had that if I didn’t go on the BuyMyLastName journey. For me, Headsetsdotcom and SurfrApp were stepping stones across the river of my life. Without them I absolutely doubt I would have thought about becoming Jason Zook.

It feels good to be done with names (especially the yearly visits to the courthouse). It feels good to have a name that I’m extremely delighted to carry forward in my life and through the lives of my [eventual] children. I can’t imagine a name I’d be prouder to have.

And in case my myriad of last names is simply too much for you to remember, you can just call me Jason.

Well, we certainly don’t have to sugarcoat the fact that 2020 was a rollercoaster of a year. If this is the first year-end review you’ve read from us, these reviews are as much for you as they are for us. We love reflecting back on the year to see where we’ve just come from so […]

Why You Should Focus on Enough Instead of More