If you haven’t figured out by now, Facebook and Google (Google owns YouTube) are not best friends. So, when you create an amazing video, upload it to YouTube, and are ready to share it with the network you’ve painstakingly built on Facebook… be prepared for a lackluster response. No, it’s not because Facebook limits who sees your newsfeed now (although they do, kind of), it’s because of the way YouTube videos are displayed on Facebook.

Let’s take a look at an example of a video uploaded directly to Facebook and shared versus a YouTube video link shared.

Completely ignore the content of these two videos and look at them from an aesthetic point of view only. 99 out of 100 human beings would absolutely click the large video thumbnail on the left way before the tiny thumbnail on the right. If you’re scrolling through your newsfeed, you’d see the large thumbnail way before the smaller one. For the record, the Facebook thumbnail is about six times larger than the thumbnail provided for YouTube. And let’s not even get started on the fact that half the time Facebook doesn’t even want to show a thumbnail for a YouTube video altogether.

(Thanks for the example Sean!)

So, obviously Facebook wants to display content uploaded to their platform in a more attractive way. But what’s even worse, is this comparison:

You’re looking at two items in the Facebook Newsfeed. The item on the left is a company I don’t currently “Like” (nothing against 20Jeans), and is a “Sponsored” post that Facebook placed in my Newsfeed. On the right is a YouTube video my friend Sam shared. Honestly, Sam’s post looks more like an advertisement than the actual advertisement does! The thumbnail is about 2.5 larger in the advertisement and the white space around the thumbnail makes it stand out a bit more in the Newsfeed. *Just FYI, whether it’s a personal profile or a business page, a shared YouTube video formats the same way in the Newsfeed.

What’s interesting to me is that most other media platforms (magazine, radio, TV, etc) typically make the content look better and give space for advertisers.

What can you do about making your YouTube videos actually get viewed on Facebook? Well, besides pressing the dreaded “Boost” (or is it “Promote”) button on all of your posts, you can use interesting screenshots for you YouTube videos with a link in the status description. Here’s an example: 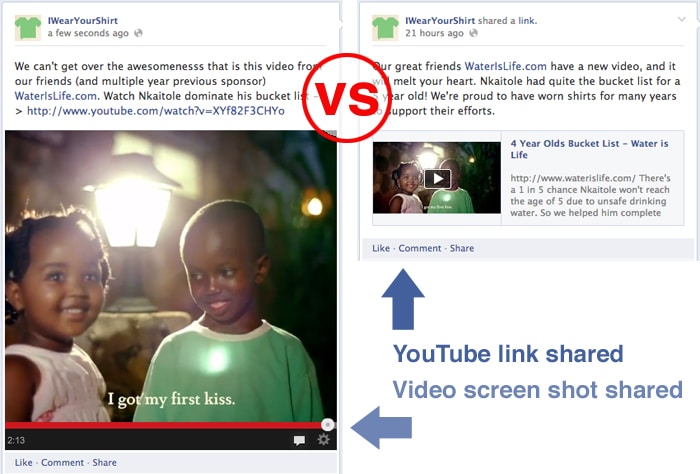 The inherent design of Facebook is geared towards the sharing of photos. Just look at the screenshot above comparing the same exact content shared as a photo with a link and just the YouTube video itself. Not only is the photo about eight times bigger, you can show a lot more visual information which will hopefully attract people to watch.

What’s the worst thing that happens by only posting the photo? Someone clicks on it and realizes it’s not an actual video. Hopefully if they’ve invested a click and are interested they click to the link you’ve included in the photo post description. Another bonus to sharing the photo is you get to pick what photo you share! With just sharing the YouTube link, your only thumbnail option is whatever comes with the video through YouTube. You can make the photo whatever you want and hope to attract more eyeballs and interaction.

*As another point of comparison: In the hour the above photo was posted it “reached” 365 people. The YouTube video only “reached” 654 people in 24 hours. There could be a lot of factors that go into this (like timing of the post, description, etc), but that’s enough for me to almost always want to post a photo with a link to the YouTube video.

As Brian Solis mentions in this article:

Facebook has it’s own SEO game, just like Google does. You need interaction and engagement for more of your posts to be seen by your friends/fans on Facebook.

In my mind, captivating and interesting photos with well written descriptions are the way to do that. Unless it’s of extreme importance, I wouldn’t waste money on the Boost/Promote button. Yes, you can pay for more people to see that post, but if the post isn’t any good, it’s not going to help your cause.

You aren’t going to get organic traffic to your video if it’s uploaded to Facebook. This goes back to the Facebook vs Google battle. Google has no interest in showing Facebook videos in its search results. A well titled, tagged, and description on a YouTube video has much better SEO implications.

If you want to experiment with content to reinvigorate your audience OR if you’re just drawing a blank on content ideas, here are 14 Instagram post ideas to get the wheels turning! We’ve been using Instagram since 2013 and oh how the times have changed. Stories, filters, IGTV—it can be hard to keep up with […]

We Need To Stop Measuring Our Self-Worth With Social Media

Listen to the audio version Episode Summary Being on social media websites can be helpful for our businesses and for staying connected with loved ones, but the longer we spend on these networks the more our self-worth gets tied to them. We’ve realized over the years how swept up our decision-making can get with social […]