Before we drop you off in your brand spanking new member dashboard, would you like to take the grand tour?

No Thanks, I'm good Take Me There
Get monthly coaching and support to FINALLY gain momentum in your business without burning out in the process. 🦄 Learn more about WAIM Unlimited.

I’ve found myself on countless “Unconventional Ways to Make Money” lists, and BuyMyLastName certainly added me to more.

There was even a Cracked.com article in 2012 that named my first crazy business (IWearYourShirt) the “6th Least Impressive Way Anyone Ever Got Rich.” While that title was a bit over the top, I’ve come to realize over the years that I take pride in doing things unconventionally. I embrace it.

Doing things unconventionally has been the recurring theme for every single business venture I’ve started. Where people see rules and a standard way of doing things, I want to run in the opposite direction at a full sprint.

Give me boundaries, and all I want to do is push beyond their limits, which is why in the fall of 2012, I found myself yet again sending out emails about a “crazy” idea I had. But before we get to that, let’s back up a second.

Where the heck did I get the idea to sell my last name??

In April 2012, my mom called me via Skype, which was not a normal occurrence, so I knew something was up. She told me that she and my stepfather were going to be getting a divorce—my stepfather whose last name I had taken. While he had been in my life for 13 years, my Mom was always the person I was closest to. On that call, I made a joke that I wanted to get a divorce, too, and I was going to “sell my last name!” That joke must have embedded itself in my subconscious because it eventually resurfaced in November of 2012 (and later in 2013) as BuyMyLastName.com, a website I created that auctioned off the rights to my last name starting at $1.

My idea was that I would legally take the last name of the high bidder (after a 30-day auction). So if SpaceJam.com won the auction, I would legally become Jason SpaceJamDotCom for one year.

At the time, my sense of identity wasn’t tied to my last name at all. Having multiple last names throughout your life will do that to you. Where I had found my greatest sense of self was through the Internet. As weird as that sounds, I built some of the strongest relationships I had by meeting people on Twitter and Facebook, through email and IWearYourShirt.

I kept the expenses extremely low for BuyMyLastName.com and only paid for website design, web development, and some PR help. The website design and development was less than $1,500, and the PR help was a percentage cut of the total last name sale (no upfront money). There was also 10% of the final sale going to a charitable organization. So from the start, I knew that I would pocket at least 75% of the total revenue BuyMyLastName brought in. Look at me, aiming to be profitable with a business!

So, what happened when I launched BuyMyLastName in 2012?

On November 1, 2012, the first auction on BuyMyLastName kicked off with an amazing bang. Within the first 24 hours, the bidding was up over $30,000! You may be shocked reading that, imagine my surprise when it as happening!

After the 30-day auction, Headsets.com was the high bidder and for $45,500 made my legal name for the next year Jason Headsetdotcom. 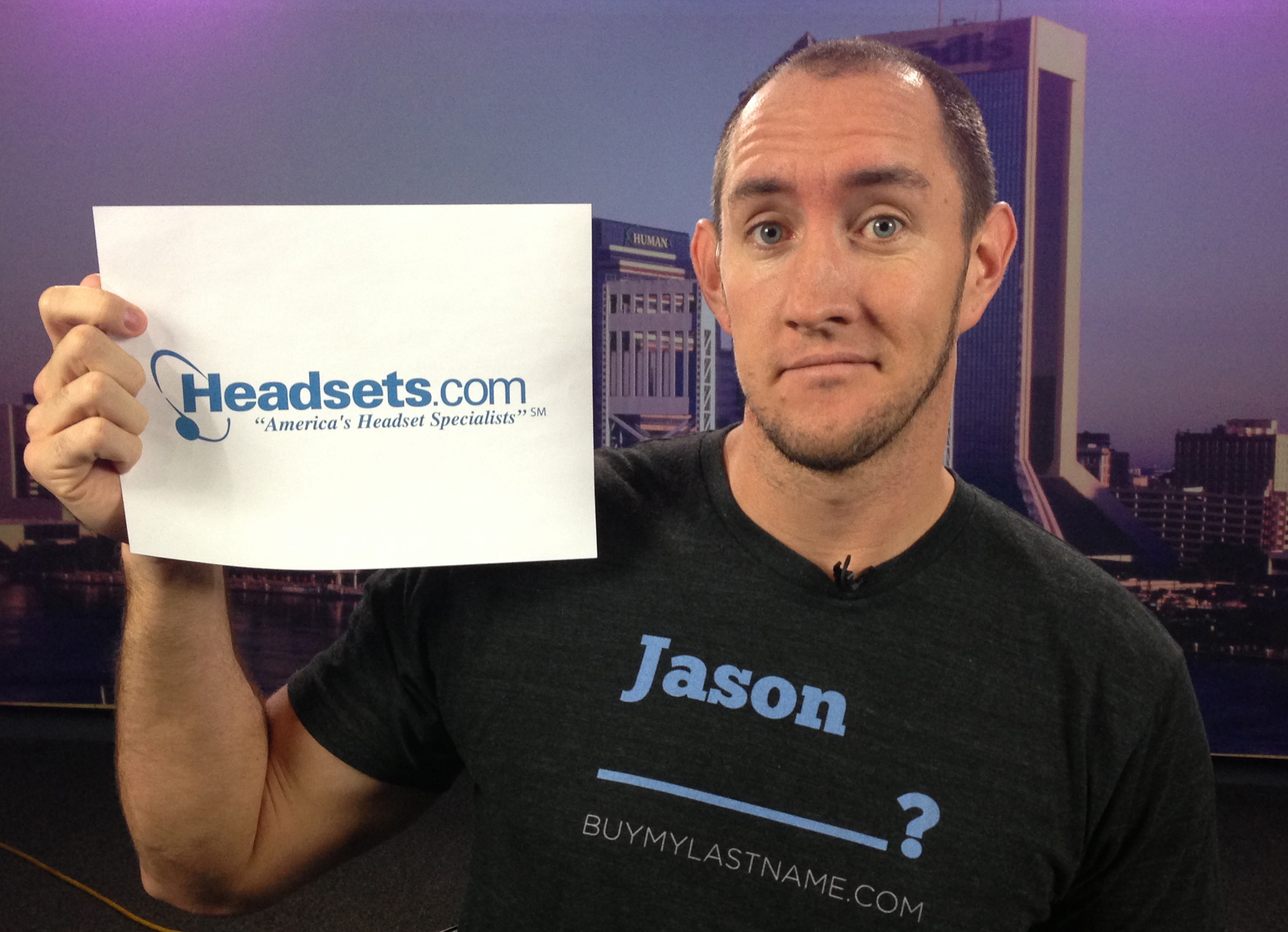 You may be wondering why a company would purchase someone’s last name? Well, I banked on the fact that I had spent four long years building a reputation, accumulating a following, and gaining media attention online. I knew that companies wanted to pay me to wear their t-shirts, so I figured selling my last name was something a brand might be interested in as well for the exposure it could get them.

After the auction ended, news of my last name sale spread like wildfire. The story of Headsets.com paying $45,500 for my last name was on the homepage of USA Today, CNN, CNBC, Huffing­ ton Post, and many more. Not only was the media attention good for Headsets.com, but they also reported an increase in sales of $250,000 in first few months of 2013.

Bam! Not too shabby!

And for my next act (selling my last name once more)…

With the successful case study of BuyMyLastName in 2012, I decided for 2013 I would auction my name off one more time. The second auction would be exactly the same, except the big selling point would be the byline on the cover of my book Creativity For Sale.

I’ll save you the details (those are in my book) and just tell you that the second auction for my last name ended at $50,000 and was won by two budding entrepreneurs who built a free surfing app “Surfr” (download Surfr on your iPhone!). 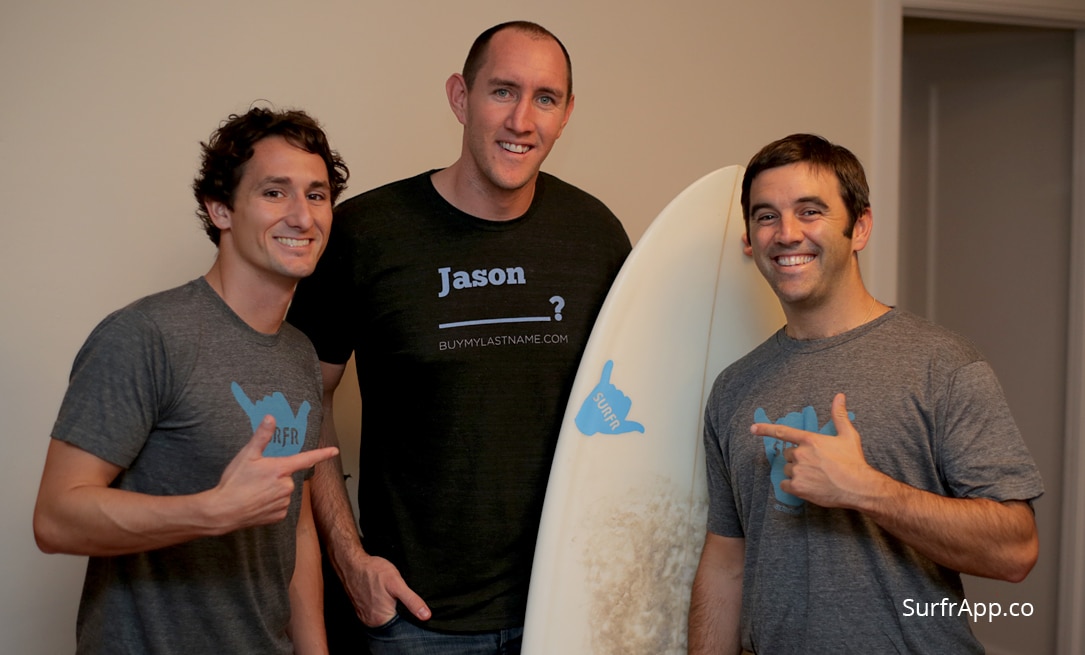 As awesome as it was to put a profitable and successful feather in my business cap, I think the possibilities that BuyMyLastName represents are even more awesome. It’s an example of how many business opportunities exist but that people pass up because of the restraints of conventional thinking.

At the time I thought of BuyMyLastName, the IWearYourShirt model wasn’t operating profitably. But I knew I had value to provide businesses in my audience and my reputation in spite of that fact.

By opening myself up to any and all ideas (no matter how crazy), I was able to identify a $50,000 revenue opportunity for myself.

After selling my last name twice I decided to be a normal human being and pick a real last name (and I was tired of the hassle at the TSA line in airports – jk, it wasn’t that bad actually).

My final last name is Zook. You can read about how I chose that name here.

If you enjoyed this story, you might also enjoy getting a weekly email from me that shares the entrepreneurial adventures of my wife Caroline and I. Just fill out the email sign up form below to get our “Wandering Weekly” email newsletter.

Get “Wandering Weekly,” a newsletter to help you live, work and create with more intention.