Wandering Aimfully Through Running A Business

Challenge All of the Assumptions, Especially Your Self-Limiting Ones

Whether you’re looking to succeed in business or make changes in your life, the first step is to challenge your assumptions.

Our brains have this mystical, magical, and commanding power over us. We know this. We even acknowledge it. But it can be incredibly difficult to challenge our own thoughts.

Phrases like “I don’t think this will work” or “I don’t know what will happen” are assumption-based.

We give our assumptions more authority and power than they deserve when trying to make decisions and take action.

I’d like to tell you I’ve come up with a perfect framework for you to test all your assumptions and never let your assumptive thoughts dictate your decisions again. But I haven’t. Maybe someone way smarter than me does, but all I have to share is a life of assumption-challenging experiences.

How To Challenge Assumptions When Starting A Business

I’m amazed at how often I hear from people who are talking themselves out of being successful (a term, for which, you must define yourself, not based on any outside metrics). They use phrases like these:

Let’s attack these assumptions together.

“My idea has already been done before.”

AWESOME! That means the market is proven for this product or service. People are already paying for it. The assumption you’d want to test (people being willing to buy this) has already been proven for you, and you don’t have to scale the huge mountain of trying to prove that there are actually people out there who will pay for your idea. It’s a good thing that there are are virtually ZERO new ideas left. Our species is too smart. Everything is just a remix of other ideas at this point. Embrace what makes your remix of an idea unique.

“I’m not special. Why would anyone care what I have to say?”

Whoever told you that you weren’t special was an a-hole. You are special. I am special. We are special little snowflakes. Now that we’ve gotten that out of the way, being “special” isn’t what’s going to help you succeed, anyway. No one lines up to buy the newest iPhone or pair of Air Jordans because Steve Jobs or Phil Knight are special people. They are special (just like you and I are), but the blood, sweat, tears, work, sacrifices, failures, mistakes, and assumption-testing thinking is what’s led to you wanting to buy the product they’re producing. People will absolutely care what you have to say. You just have to understand it may take years for you to find the right, resonant way to say it. You are significant.

“I don’t have the skills required to make my idea happen.”

I have virtually NO specific skills. I’m a jack of all trades, master of none. I dabble in design, but I’m years behind designers whose work actually receives praise and accolades. I don’t know a thing about programming languages. I’m terrible at managing people. Really, you could argue, all I have are my ideas. But yet, I find ways to turn my ideas into realities. I seek out people to whom I can outsource my weaknesses. If you really want your ideas to happen, the skillset you have doesn’t matter one bit. The only skill you need is the work ethic to figure out how the heck you’re going to get your idea out into the world. Someone else in the world knows what you don’t. Find them. Pay them money. Exchange something for their time. No skills required.

“I can’t make money doing what I want to do.”

Why not? Because other people haven’t been able to? Because others already have? Those are other people, they aren’t you. I’m never willing to accept assumptions based on the actions of others. This is a blessing and a curse. But you can make money doing literally anything right now. I once wrote a silly joke in an email about becoming a professional snuggler. Then, a few weeks later, I received an email from a woman named Sam who actually created a popular Snuggling Agency because of my silly joke (amazeballs!). I’ve made money doing weirdly outlandish things. My name has been included in segments on TV called “they get paid for that?” and “jobs you never thought you could get paid for.” As the old adage goes, you won’t know until you try. And as it relates to making money doing what you want to do, you absolutely won’t know until you try (and try in all the different ways that other people haven’t thought of before, or in ways they haven’t done it as well as you will).

“I don’t know where to start.”

By reading this article, you are starting. By wanting to start, you are starting. But those things aren’t enough. Eventually, you just have to put one foot in front of the other (or click a mouse one click in front of the other). Because guess what? I didn’t know how to start, either. I still don’t know how to start most projects, but I do it, anyway. I find my way by giving myself permission to start ugly, learning all I can, and then trusting my intuition along the way. It looks different every time, but the important part is that I start at all.

There is no straight line to success

Our culture loves to tout the successful. Magazines, TV shows, movies, and websites love to glamorize how people “made it” and “became so insanely rich they turned into a pile of money and flew off in the wind.”

People assume success is a straight line. You start on your little dot on a map. Then you cross a single line, and you’re at the X. Success!

You follow a dotted line that twists, turns, curves, hits all kinds of obstacles in your way, and eventually you find the X (maybe). 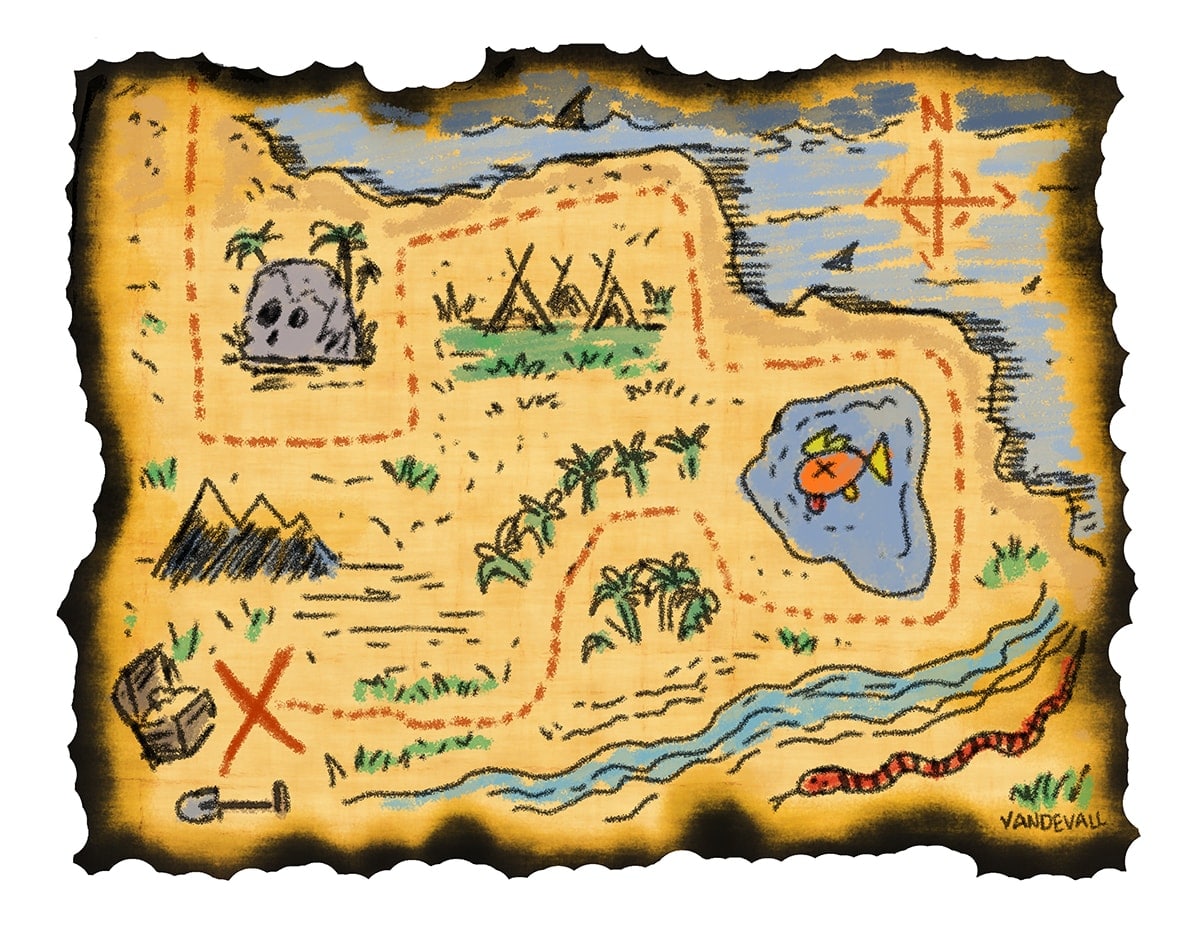 The unfortunate thing about the treasure map to success is that sometimes you get shipwrecked. Sometimes you get stranded. Sometimes your only friend is a volleyball. No one can predict when you’ll get marooned on a deserted island (read: when you will have a mistake or failure). But it will happen. It happens to everyone at some point or another.

Just like testing all your assumptions, if you accept the fact that success looks like a treasure map, you’re going in the right direction. You will veer off path. You will hit roadblocks. You will have challenging moments when you question the entire journey altogether, but the journey wouldn’t be worth it if you didn’t.

As I mentioned, there’s no framework for getting better at testing your own assumptions. All you can do is make the decision to start testing all your assumptions (and the assumptions of society, your friends, your family, etc.) all of the time.

I test those things. One by one. Assumption by assumption.

Here’s one question that always helps me when I’m on the dotted line of my treasure map and being met with an assumption:

“Have I dealt with this exact issue before with the same exact circumstances?”

Almost always, the answer is “No.” It’s nearly impossible for the answer to be “Yes.” And because the answer is “No” you have to test your assumptions. Sometimes, it feels like you’re re-testing assumptions you’ve already re-tested in a re-test of assumption re-testing before. Well, welcome to life and business. It’s not a straight line. It gets pretty damn windy, and you’d better hold on for the ride.

My wife, Caroline, and I have some of our most emotionally charged discussions when testing assumptions. We typically use the three whys:

“Why does it have to be done this way?”

“Why do we have to run our relationship the same way as other people?”

“Why do we ever have to do anything the same as anyone else, ever??”

That last one is a troublemaker, and admittedly, must be obnoxious to deal with (Sorry, Carol, love you!).

Constantly testing assumptions in life and business has gotten me where I am today. A place where I truly feel I’ve “made it.”

The point here is that I’ve “made it” because I’m willing to question everything (and I have the ability to do so). I am in control of my outcomes and I’ve earned every bit of success I’ve achieved. I could lose everything in an instant, and I’d be okay, because I know what it’s taken me to get where I am today. A place (or some version of it) I could get to again, knowing I’ll have to follow a pretty damn windy treasure map to get there.

Whether you’re looking to succeed in business or make changes in your life, the first step is to challenge all of your assumptions.

As much as we’d like to promise you’ll never burn out again just by reading this article, that simply wouldn’t be true and isn’t something anyone can guarantee you. What we can guarantee you, however, is that this article will help you put anti-burnout guardrails in place and assist you in the creation of a […]

Wandering Aimfully Through Running A Business

2021… you went by so slowly and yet so quickly at the same time. Another year in the books, folks! While 2021 felt a lot like 2020 in many ways, we were incredibly grateful to make it through some fairly rough patches and also some really great moments too. 2021 summed up in a GIF: […]